This article appeared in The Connecticut Post on March 26, 2021

Hartford, New Haven and Bridgeport have all had Democratic mayors for decades, and during this time, each has had difficulty overcoming the litany of urban problems associated with other struggling U.S. cities. Understanding this historical perspective gives context to the ill-advised stance state Democrats have taken on recent zoning legislation.

Cities such as Pittsburgh, Cleveland and Detroit have also experienced structural changes in their economies and population shifts that had negative impacts on their abilities to deliver quality services to their residents. These once-vibrant industrial centers faced a reckoning, endured hard times and rose from the ashes. Why haven’t Hartford, New Haven and Bridgeport been able to experience a similar renewal?

This political sleight of hand is intended to divert attention from their problems as Democratic-run large cities to an imagined one — well-run, generally Republican communities. Their message is that Connecticut town’s zoning policies are exclusionary and fundamentally racist and thus are the root cause of their cities’ problems.

Hartford Mayor Luke Bronin and New Haven Mayor Justin Elicker have stated that Connecticut is a segregated state and its towns and cities practice racist zoning policies. The Democrats are proposing a solution to resolving this by taking away local zoning authority and allowing developers to build with greater density, thereby creating greater “housing equity.” Of course, this would also result in many of our towns losing much of the unique character that makes them one of the most important reasons people move to and stay in Connecticut. So why attempt to change what has obviously worked well for the state?

At what point do we shine a spotlight on failed leadership and make a choice to move in a different direction? This is not necessarily a political statement as much as it is common sense. When one political party has held the seat of power decade after decade, and problems have been left to metastasize instead of getting cured, when does it become incumbent on political leaders to change course?

Struggling Connecticut cities need a radical plan that combines public, private and philanthropic efforts to help effect sustainable change. They need innovative thinking, community input and imagination to get this done. How about eliminating business taxes or land taxes on an interim basis to attract alternative housing development and encourage small and large businesses to invest in these communities? Innovative solutions should be targeted at those cities most in need, with a goal of allowing them to experience the same revitalization others have.

Greenwich will continue the hard work of improving housing affordability. It’s important to remember that it’s not just the quantity of housing, but also the quality and the character a community that matters to residents. Greenwich cares deeply about each and every resident. Greenwich can and will do more.

So when you hear people like Elicker accuse Greenwich of practicing “racist” policies, or Bronin say Connecticut is a segregated state, ask them what they and their party have done to help the plight of lower-income families in their own cities. The answer, sadly, is not much. They should focus on addressing their own failed policies instead of blaming their plight on others. 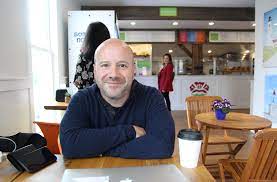 Dan Quigley is chairman of the Republican Town Committee in Greenwich.